By Tuti Sunario
For Indonesia Digest

Lately the Indonesian batik has come very much in vogue throughout the country. Gone are the days when fashionable young people considered batik as traditional, out-of-date, and dull, only good for museums or to wear around the house.

Now that Indonesians top fashion designers have come up with trendy new styles, the batik blouse or dress has suddenly become a must have in any respectable wardrobe and can be seen worn by teens to older ladies, in malls or even to gala events, from fashionable celebrities on television, to models on the catwalk, to government ministers on formal occasions, all wear batik.
No longer the strict traditional wear, batik has suddenly come alive with a new elegance fit for young and old. This about-face is most unusual and unexpected, since Indonesian women are known to be very fashion conscious, preferring foreign brands. This is, therefore, proof what changes design can bring about.

Another positive development is Indonesias music scene. Indonesian bands, singers and CDs have suddenly become top hits not only in Indonesia but also in Singapore and Malaysia, to the annoyance of a number of Malaysian officials, and to the surprise of Indonesians themselves.

The other side of this popularity, however, is that piracy of music and CDs is rife, and traditional Indonesian songs, dances and designs have been patented by foreigners claiming these to be their intellectual rights, to the chagrin of Indonesian artists and artisans themselves. Indonesians have protested to Malaysia, since Malaysia has claimed the song Rasa Sayange and the traditional reog dance as their own, whereas any Indonesian knows that Rasa sayange comes from the Moluccas and the reog dance originates from Ponorogo in East Java. Recently, Balinese silver craftsmen have staged demonstrations objecting to the fact that their traditional designs have been pirated by foreigners and patented abroad.

Two years ago, the government decided to boost the creative industries, and today creativity has become the buzz word nation-wide.

Apparently, among developing countries, Indonesia is among the 10 top exporters of creative industries with a value of US$ 2.83 million . Top countries being China, Hong Kong, India, Turkey, Thailand, Mexico, Malaysia, Singapore and South Korea. Indonesia is no 7 in arts and crafts, no. 9 in celebrations, no. 3 in wicker ware, no. 3 in other arts and crafts, no. 7 in design, no. 10 in fashion, no. 4 in interior decoration, no. 7 in games, no. 5 in graphic design, no. 3 in glassware, no. 7 in video games, no. 8 in publication, no. 3 in newspapers, no. 7 in visual art, no. 8 in photography, no. 7 in sculpture, and no. 9 in other visual arts, writes Kompas daily of 26 September 2008.

According to the Creative Economy Report 2008 by John Howkins, continues Kompas, within developing countries on average, the creative industries contributed 29% to total exports in 1999 and 41% in 2005. In 1999 they contributed 7.3% to the global economy.

In Indonesia on the contrary, creative industries contribution to exports has only reached 8% in 2006 with a Rp. 45.13 billion value in exports. On the other hand, Indonesia is the 8th. largest importer of audiovisual creations, and no. 8 importer of films.

Nonetheless, Creative Industries together form the 7th. top contributor to Indonesias GDP, and the fourth largest in exports in the period between 2002-2006, surpassing performance of the transportation and communication sector, and the construction sector.

It is these potentials that Indonesia has in the creative industries that has pushed Minister of Trade, Mari Pangestu to insist that creative industries must form an integral part of Indonesia Long term Development Plan, in which she plans to develop the industries in two phases, namely the strengthening phase between 2008-2015 and acceleration from 2016-2025.

But Indonesia is still in the initial stage of developing its creative expressions into industries. Indonesia has plenty of creative workers and artisans, however, this can as yet not be called a viable industry.

According to Togar Simatupang, lecturer at the Business and Management School of the ITB University in Bandung, today Indonesia is only at the introductory stage of creative industries, moving towards the development and investment stage before reaching the competitive stage and continue with efforts towards sustainability.

Similarly, Andi S. Boediman, Innovation Consultant Creative Industry Evangelist, said that following the experience of other countries, it is most important to build first a sustainable supply chain platform that is capable of transforming creative powers to meet the wishes of consumers. Then there is capacity building, before continuing with development, next are meetings with distributors, and partnership with investors, to finally build market potentials.

Film producer, Nia Dinata is, however, convinced that we must first create a strong foundation, which must be based on capable human resources, for which Indonesia will need more film academies. Today, there is only one film academy in Indonesia compared to 30 in India and 7 in South Korea, said Dinata.

Those active in the creative industries further maintain that todays business climate is not yet sufficiently conducive, writes Kompas. This is because government regulations often do not support or may even hamper development of creative industries. There are the problems of lack of promotional funds, credit access, moreover there is little government protection of intellectual property rights.

Nonetheless, with such a wealth of talents and artistic prowess in the country, there is the promise that Indonesias creative industries will thrive economically, provide employment to millions more, and at the same time revitalize Indonesias plentiful cultural assets. 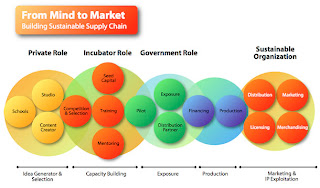